Roxana’s always been a fish out of water, always out of place, never quite fit in the same way others did. She’s always had a heightened sense of self, so she emulated them well and no one ever sensed how alienated she felt, but she never really had that genuine connection to her environment that others did.

Despite all this, she’s always been able to find beauty in life, not in the people around her, but in the physical world itself. She enjoys living, but less so with others around, except for a handful of people whose company she tolerates.

Letting people in is not her forte, so she hasn’t had much luck with relationships in the past. Even those that seemed promising soon turned out to be red herrings. One was too eager, one too cold, one bit his nails, another had an off-putting affinity for sports, and so on. None quite seemed to click with her. But this didn’t so much put her down as frustrate her that all the men to ever approach her, of which there have been many, always seemed like they were an entirely different species. She still isn’t sure whether she’s just highly observant and gets easily fixated or intentionally looking for reasons to dislike each one and make a bigger deal out of them than they really are.

Despite Roxana’s disdain for people, they have always fascinated her, so much so that she left home to pursue a career as a psychiatrist. It’s what she’s always wanted, and perhaps this will somehow lead her to that one meaningful connection that will have made the wait and frustration all worthwhile.

It may be just around the corner.

Roxana saw the stories I wrote for Teodora’s drawings and asked if I could write one about her. I have to add that we don’t know each other that well, so I took liberties with a lot of things I knew nothing about. 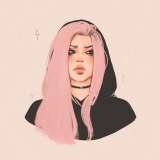 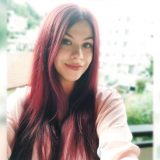 All lights go out eventually, as darkness seeps in

I met a witch and she gave me this stone. . #rune

Morgan says I'm giving off weird vibes. In my defe

Milton's run away from his quiet hometown to pursu

Airplanes and clouds messing up my shot -_- . #nor